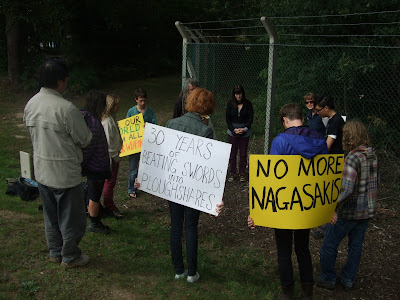 Last week-end I pootled up to Oxford for a Faith and Resistance Retreat organised by the good folk from the Catholic Worker.

Perhaps an unusual way to pass the week-end given that I aint Catholic, and I dislike working :-) Moreover, although I was brought up a believer, I have lapsed spectacularly and have no intention of unlapsing...

The good thing about the Catholic Workers is that they don't give a monkeys about any of this. They'll work with anyone, whether they have a God or not. In fact they're possibly better understood as a rather unusual kind of anarchist group - the kind that goes in for spirituality as well... George Woodcock in his classic book "Anarchism" discusses the Catholic Worker in terms of Tolstoy's anarchist principles:

Perhaps the most impressive example of Tolstoyan influence in the contemporary Western world has been ... the Roman Catholic group associated in the United States with the Catholic Worker...

In recent times, in the UK and elsewhere, the Catholic Workers have been among the most committed and consistent of anti-war and anti-military groups. Members of the Catholic Worker have done hard time in the UK for opposing the Iraq war, and the war machine associated with it.

So this was a retreat with a difference. We spent the Sunday enjoying the sunshine and discussing the impact of the first Plowshares trial 30 years ago. Three of those present at the retreat had participated in Plowshares actions, all of them serving many months in jail in the US, Ireland, and the UK.

On Monday we adjourned to Aldermaston Atomic Weapons Establishment (AWE). Three of those present broke into the base to express their opposition. Members from the Trident Ploughshares group were also present blockading the base. While this went on the rest of us (having arrived late after a nightmare traffic jam) vigilled at the gates of AWE.

AWE is a huge establishment, and it is currently receiving extensive investment. Capital works at AWE are currently in the region of £1 billion per year - a new laser system is being built, as well as a hydro-testing plant; the figure of £1 billion p.a. does not take into account investment associated with the renewal of the Trident weapons system which will cost tens of billions; no belt-tightening here.

By vigilling at the gate of AWE we sought to remind ourselves, and those passing by, of the real purpose of AWE. It exists to build weapons of unimaginable destruction; weapons that, if used, must inevitably result in death and misery for tens of thousands of human beings. I held my son in my arms and felt sick at this monster that we have built, and which he and others will have to face in years to come. 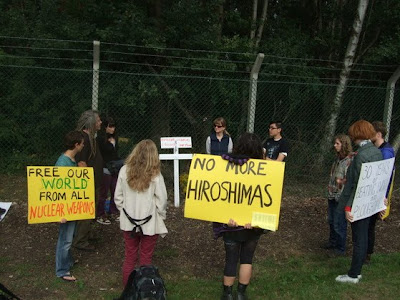 "Believe nothing, no matter where you read it or who has said it, not even if I have said it, unless it agrees with your own reason and your own common sense." The Buddha